Hormones are chemical matter produced by various organs and glands that are secreted throughout the body. They travel through the bloodstream and are responsible for regulating the activity of particular organs. The most well-known of the traditionally “female” hormones is estrogen.

Despite popular familiarity with the term “estrogen,” many women remain uncertain as to what role it performs within the body. In order to make informed decisions about health, understanding what estrogen is and the different types of estrogen is essential.

Estrogen, also known as oestrogen, is the term for any group of chemically similar hormones that promote the development and maintenance of female characteristics of the body.

Estrogen is commonly mistaken as an exclusively female hormone; however, both men and women produce estrogen hormones. Although, not all estrogen hormones play a significant role in men like they do in women.

For adolescents, puberty begins when the ovaries increase production of estrogen and other reproductive hormones. Then, for the following 35 years or so, estrogen levels remain fairly stable with consistent fluctuations throughout the menstrual cycle and during pregnancy. Then, toward the end of a woman's reproductive years with menopause, ovarian estrogen production starts to decline.

Estrogen also affects a multitude of other bodily systems and organs, including the urinary tract; heart and blood vessels; bones; brain; hair; mucous membranes; pelvic muscles; and the largest organ of the body, the skin.

This is why an estrogen imbalance can have serious consequences on health and well-being, causing unpleasant side effects and conditions.

The name estrogen is derived from the Greek word oistros, also known as oestrus or estrus, literally meaning “verve or inspiration.” It figuratively refers to sexual passion or desire. The suffix -gen means “producer of.”1

In ancient Greece, oestrus was a gadfly that stung animals and drove them to react, therefore inducing the association with passion for life, creativity, and inspiration. When translated to the female reproductive system, estrogens are related to pregnancy and childbirth.

There are two main types of estrogen hormones: steroidal and non-steroidal.

Steroidal hormones are lipids made from cholesterol; they're mainly produced in the adrenal glands and reproductive glands. Because they are lipids, this means that they are lipid-soluble, synonymous with the term fat-soluble.

There are three structures of endogenous estrogen hormones: estradiol, estrone, and estriol. Different amounts of each hormone will be produced in a woman's body depending on her reproductive stage.

Estradiol is the most common female sex hormone in women of childbearing age in terms of serum levels and estrogenic activity.

The majority of the female body's estradiol hormone is produced in the ovaries; it is formed from the corpus luteum and developing egg follicles. Smaller concentrations are produced by the breasts, liver, adrenal glands, and other non-endocrine tissues.

Estradiol circulates throughout the body, including the brain and pituitary gland, and influences weight, memory, learning, and reproduction. Because of this, many normal functions are compromised when the ovaries are removed or lose their function after menopause.

Estrone is the primary estrogen hormone once a woman begins transitioning into perimenopause and postmenopause.

When ovarian function halts with menopause, small levels of estrogens are produced by converting adrenal precursors into estrone and estradiol. This is mainly done by enzymes in body fat. Although estrone is not considered as potent as the estradiol produced by ovaries, it performs the same functions and behaves in the same way.

Estrone produced in adipose tissue may have a role in modulating loss of bone mass after menopause since most estrone is converted from androgens in adipose tissues. Consequently, higher levels of body fat are associated with higher circulating levels of estrogens. This leads to a higher chance for postmenopausal women to contract breast and endometrial cancer.

Estriol is the predominant circulating estrogen in terms of serum levels during pregnancy. In non-pregnant women, it is generally the weakest and least active type of estrogen. 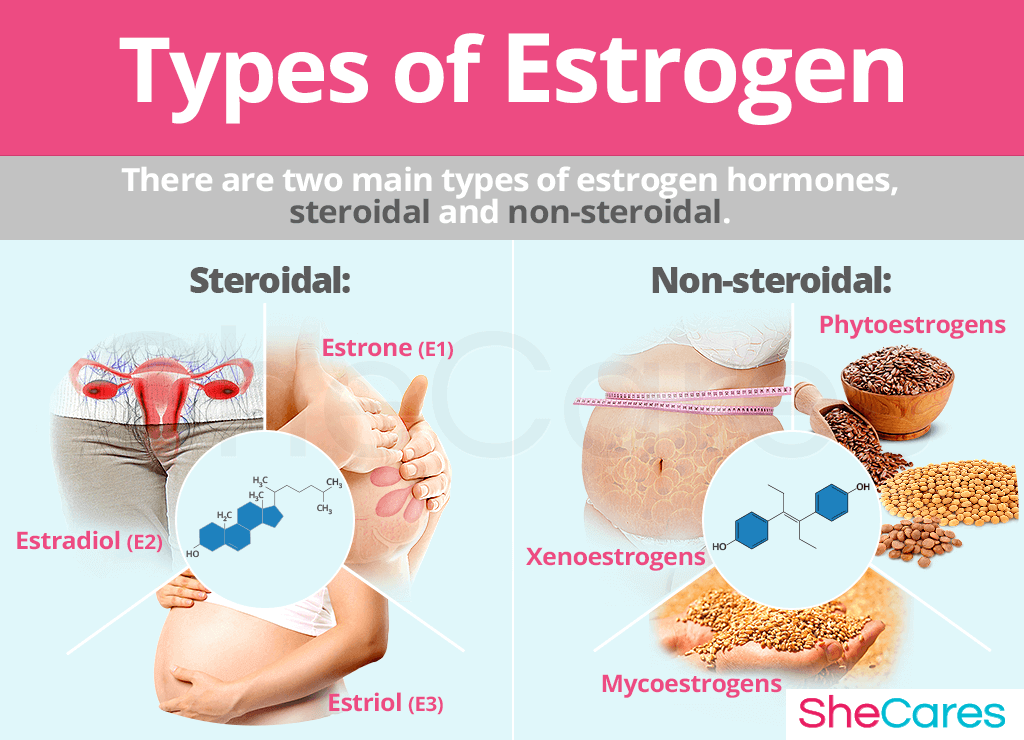 Non-steroidal hormones are derived from proteins, making them water-soluble and unable to penetrate and enter target cells. Therefore, non-steroidal hormones bind to receptor proteins on the target cell's external membrane. From there, enzymes or other membrane transport systems send a second messenger to relay information to the interior of the cell, causing the cell to then react to the specific hormone.

Many natural and synthetic substances are known to have estrogenic activity. Non-steroidal hormones consist of xenoestrogens, which are further divided into phytoestrogens and mycoestrogens.

Xenoestrogens are a type of endocrine disruptor that alter the normal function of hormones. When xenoestrogens enter the body, they increase the total amount of estrogen, resulting in estrogen dominance. Since they are not biodegradable, they are stored in fat cells, and buildup can lead to reproductive issues, obesity, diabetes, and more.

Phytoestrogens are compounds produced naturally in plants - such as legumes, soybeans, and flax seeds - that exert estrogenic actions by binding to receptors. When they are consumed in moderate amounts, they can help with hormonal balance.

Continue reading to gain valuable information about the process of estrogen production in glands and receptors.

It is important to know about phytoestrogens, so that you can make informed decisions about their use in treatment of menopausal symptoms.

Xenoestrogens are chemical compounds manufactured in laboratories and are included in many of the products that you buy at the grocery store.

The importance of estrogen cannot be understated. When women go through an imbalance of their estrogen and progesterone hormones, they will experience many