A woman suffering from oily skin may struggle with increased sensitivity or insecurity due to the excess shine. This common problem may be experienced at many stages of a woman's life as a result of an increase or drop in hormones, which can cause the sebaceous glands to become overactive and produce too much oil.

Fortunately, there are ways to manage oily skin caused by hormonal imbalance, whatever a woman's age. So, continue reading to learn everything about oily skin, its causes, risk factors, signs and symptoms, prevention, and treatment options.

Oily skin is characterized by shiny, sallow, dull skin with a tendency to display visible pores. One of the most likely causes of oily skin for women is hormonal imbalance. Although hormonal fluctuations take place naturally during a woman's menstrual cycle, many women suffer from disruptive symptoms of this hormonal imbalance, which is known as premenstrual syndrome (PMS).

Significant hormonal changes also take place during certain stages of reproductive life, such as puberty, pregnancy, post-partum - including breastfeeding - and menopause. These hormonal changes, like during PMS, can affect production of sebum, leading to symptoms like oily skin.

Individual experience of oily skin can be drastically different from woman to woman. Many women report flare-ups only at certain times of the month or during certain periods of their lives; whereas, for others, it is a continuing battle. There are three criteria that can help identify ways in which this symptom may vary, which are location, frequency, and intensity.

Although the frequency, duration, and intensity of oily skin may vary among women, in most cases, it can cause a very real and negative impact upon a woman's confidence.

In order to understand the processes behind oily skin, continue on to the next section to read about its hormonal and non-hormonal causes.

Learning about the causes of oily skin provides the key to understanding how to prevent and treat this troublesome condition. While there are other external and internal factors which can contribute, most doctors and researchers believe hormonal changes are the primary cause of oily skin.

Continue reading to learn more about both the hormonal and additional causes of oily skin.

Hormones are chemical messengers that control every process in the body. So, when alterations in hormone levels happen, specific health disorders can occur. Medical researchers have found that fluctuating levels of hormones, especially estrogen and progesterone, make women more susceptible to oily skin. This is because estrogen and progesterone influence the sebaceous glands, which secrete an oily substance called sebum, which keeps skin and hair supple. However, its overproduction can lead to clogged pores, oily skin, and acne.

A deficiency in estrogen at certain points in the menstrual cycle and during phases of significant hormonal imbalance - puberty, pregnancy, post-partum, and menopause - causes levels of estrogen to decrease and, consequently, results in production of more testosterone, which produces oil. In this sense, it can be said that oily skin is largely caused by the hormonal fluctuations during the changes women go through during their reproductive lives.

Furthermore, there are also specific hormonal causes and typical environmental factors which can explain the occurrence of oily skin according to the stage of a woman's reproductive life in which this disorder appears, such as around PMS and during puberty, pregnancy, post-partum, and menopause.

Hormonal Changes during Different Phases in a Woman's Life

PMS is a consequence of hormonal fluctuations linked to the menstrual cycle. It is a collection of disorders, which may include oily skin, among others.

Puberty is the stage in which a girl's body begins to produce reproductive hormones; these and other factors, such as stress and changes in emotional state, contribute to oily skin during puberty.

Pregnancy leads to extreme changes in the production of reproductive hormones, which along with other factors, like increased volume of blood, can lead to oily skin.

Post-partum and breastfeeding is another stage where reproductive hormones are imbalanced, leading to symptoms like oily skin. Also, other factors contribute to oily skin in postpartum, like stress of a new baby.

Menopause is the stage in a woman's life when production of reproductive hormones naturally declines, signaling the end of a woman's fertility. As well as hormonal causes, other factors add to the reasons for oily skin during menopause, including the experience of other symptoms of menopause.

While hormonal imbalance is the major underlying cause of oily skin during a woman's life, experts also point out that oily skin may be caused by other, less common reasons, including sun tanning, using incorrect products, and as a side effect of certain types of medication.

Keep reading to learn what these risk factors and triggers are that have such a profound effect on a woman's experience of oily skin.

Some women are more likely than others to suffer from oily skin because of inherent behavioral and health reasons - such as obesity or stress. These predisposing factors can affect a woman's hormone levels and increase the chances of developing oily skin during her reproductive life.

In addition to long-term risk factors, oily skin can also be triggered by certain environmental factors and behavioral habits. Avoiding these unhealthy environments or habits as much as possible may help to avoid the onset of oily skin symptoms. These include habits like smoking and keeping a sedentary lifestyle as well as other external triggers.

Continue reading to discover the symptoms and signs of oily skin to be able to choose a treatment specific to its cause.

Due to the nature of the visible symptoms on a woman's skin, oily skin can be easily diagnosed. Medical signs are measurable criteria that are usually assessed by a physician. The following medical signs will most likely be taken into account by a physician when diagnosing the disorder:

To diagnose and identify the symptoms of oily skin, a doctor must typically review the patient's medical history and then conduct a physical exam. The doctor may order additional tests, if necessary.

Women who experience frequent bouts of oily skin that are interfering with their daily lives may wish to treat or learn how to prevent them. Keep reading below to learn useful techniques and habits that will prevent oily skin or make it more manageable.

While there is no single way to completely prevent oily skin, just as there is no way to stave off natural hormonal processes, there are a few steps that a woman can take to lessen her chances of developing severe oily skin or to minimize the frequency of oily skin episodes.

Lifestyle changes for prevention are extremely important, especially with regard to diet, exercise, and healthy habits. Moreover, women may seek ways to complement these lifestyle approaches with the use of supplements that help enhance the endocrine system and, therefore, help prevent or ease symptoms of hormonal imbalance such as oily skin.

For women who are already going through the disorder, prevention may not be possible if oily skin has already appeared. Fortunately, there are many ways to manage it in order to lessen the intensity of the symptoms. Keep reading to learn about the different ways to manage oily skin.

Wherever a woman happens to be experiencing oily skin, there are effective ways to instantly manage oil levels. Making minor daily changes and avoiding triggers can make a huge difference for women who are trying to manage oily skin.

There are certain tips and tricks available that can help improve the experience of oily skin, giving women the tools they need to cope with excess shininess and blemishes. There are general tips that women of all ages can use, such as washing the face two to three times a day with a facial cleansing gel. 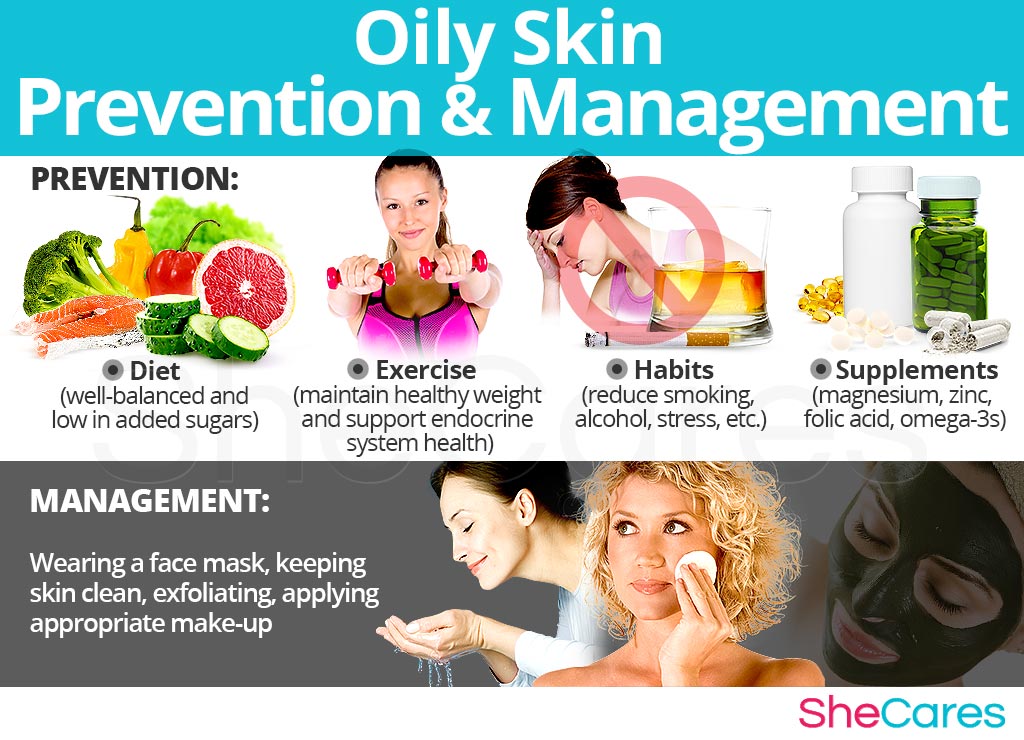 While these measures often help to reduce the intensity of oily skin, they are unable to treat the root of the problem, which, in most cases, is hormonal imbalance. However, there are several natural treatments that can treat the hormonal causes of oily skin. Please continue to the next section to learn more about treating oily skin. Keep reading to discover approaches to treatments for oily skin.

Oily skin, a common consequence of hormonal imbalance, can be frustrating for any woman who experiences it; however, some women suffer so badly that it begins to interfere with daily life. Fortunately, it is more than possible to find an effective treatment for oily skin.

Three levels of approaches can be considered for treating oily skin. These are categorized as: (1) Lifestyle Changes, (2) Alternative Medicine, and (3) Pharmaceutical Options.

Women are encouraged to begin with the least risky approach to oily skin treatment, lifestyle adjustments, and then proceed to the next level of care. While medical intervention is not usually necessary to treat oily skin, some women who are unable to find relief from lifestyle changes and alternative medicine may wish to consider pharmaceutical options, after properly assessing the risks associated with such a treatment.

This primary level of treatment involves the least amount of risk, though conversely it requires the highest amount of self-discipline. Often simple changes in lifestyle can reap huge benefits in fighting oily skin, and achieving a higher overall level of health. Fundamentally, an improved diet, regular exercise, and healthy habits can do a woman great service.

While these changes will help alleviate oily skin, they do not directly address hormonal imbalance - the most common cause of oily skin . So, further treatment may be necessary. Alternative medicine has proven to be an excellent way of treating oily skin related to hormonal imbalance in a safe and natural way.

Alternative medicines and supplements involve little to no risk and can be an extremely effective way to treat oily skin. In the case of herbal supplements, there are two main types that can be used: phytoestrogenic and hormone-regulating herbal supplements.

These supplements, such as black cohosh, contain estrogenic components produced by plants that complement the low estrogen hormones in a woman's body, helping alleviate oily skin. By introducing plant-based estrogens into the body, these herbs treat the underlying estrogen deficiency behind oily skin.

They are mainly effective for menopausal women who are more likely to have low estrogen levels but are not necessarily effective for women in other stages of life such as puberty.

These supplements, including Macafem, stimulate the body's natural hormone production by nourishing the pituitary and endocrine glands, helping the whole hormonal system produce hormones more efficiently. This ultimately results in balancing not only estrogen, but other important hormones such as progesterone.

These supplements can be considered the safest and most natural way to treat the underlying hormonal imbalance behind oily skin and can be taken throughout a woman's life as they support the body's natural hormone production.

Additionally, there are some other types of supplements that can also alleviate or make oily skin more manageable, including vitamins and other herbal supplements.

A combination of approaches is usually the most effective route to take. Lifestyle changes combined with alternative medicine will most likely be the best way to alleviate the symptoms of oily skin. However, for some women the symptoms will be so severe that a more drastic treatment is necessary.

Interventions at the third level involve the highest risk and often the highest costs. Not all treatments are suitable for women at every life stage. So, it is strongly recommended to speak to a licensed healthcare practitioner before starting any pharmaceutical treatments for oily skin.

These three approaches are not mutually exclusive. A woman may use different approaches at different times or any combination of them, depending on the duration and severity of symptoms. Today more and more women find that dealing with hormonal imbalance symptoms is best accomplished via a combination of healthy lifestyle and alternative treatments.