Having sickle cell disease carries serious risks of complications, which can make the decision for motherhood more difficult. This genetic condition is growing in prevalence around the world, and it is more common among Blacks and Hispanics.

Fortunately, with careful monitoring and proper care, the majority of sickle cell women have successful pregnancies. Keep on reading to learn about the ways in which you can prepare yourself for pregnancy and not let your sickle cell disease stop you from being a mom.

Sickle cell disease (SCD) is a group of heritable conditions passed on to a child when both parents contribute a gene. It is characterized by an abnormally shaped hemoglobin, which is a protein found in the red blood cells (RBC) and responsible for carrying oxygen throughout the body. Its unusual C-letter shape prevents RBC from moving smoothly through the veins and arteries, bringing about numerous symptoms and risks.

Sickle cell trait (SCT), however, occurs when only one parent passes a gene, resulting in a child being a carrier without developing the disease itself.

There are a few recognized types of SCD, such as sickle cell anemia (SS), sickle hemoglobin-D disease, or sickle beta-plus thalassemia (SB), none of which can be cured.

There are five possible scenarios of sickle cell gene inheritance:

There are prenatal tests to check whether a baby inherited a gene for sickle cell disease or trait.

The majority of negative effects are seen among women with sickle cell disease, but those carrying a trait have to take their condition into consideration when preparing for pregnancy due to gene inheritance.

Most women with sickle cell disease can get pregnant, but the condition can potentially affect a woman's fertility due to:

Effects of Sickle Cell Disease on the Mother and Baby

During pregnancy, the episodes of sickle cell disease pain - called crises - tend to increase in their frequency and severity. Mothers are put at an increased risk of stroke, pulmonary hypertension, anemia, infections, and multi-organ dysfunction.

SCD might also affect the developing baby due to an insufficient oxygen supply, resulting in severe anemia, poor fetal growth, or low birth-weight. 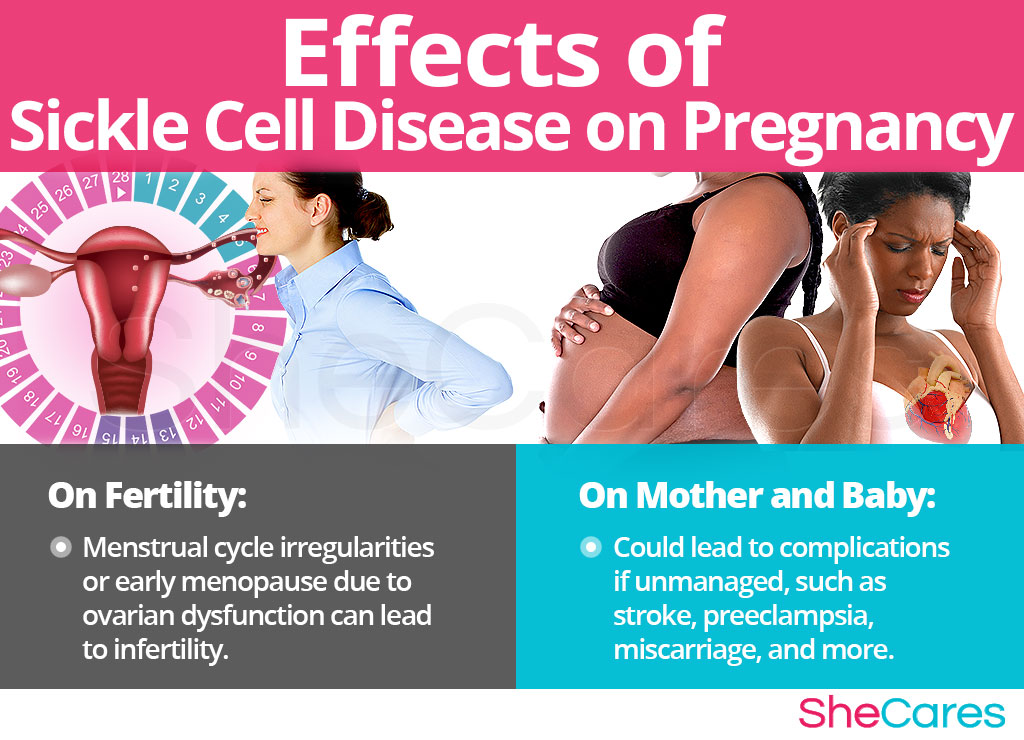 Your goal during preconception is to improve your lifestyle habits to decrease the occurrence of crises. Consider the following approaches:

Many women with SCD have nutritional deficiencies and poor circulation. Their increased calorie and micronutrient need can be satisfied with the foods that are rich in the following:

As you attempt to get pregnant, it is a good idea to think of all the ways to help you be prepared in the case of a sudden flare-up of your condition.

Not all women experience a worsening of their condition during pregnancy, but having had created an action plan prior to conceiving will now give you a peace of mind that you have the means to face the crisis, if it occurs.

It is clear that sickle cell disease in pregnancy is a challenge both for women and their doctors, but it does not have to be an inhibiting factor. Most women SCD have manageable pregnancies and healthy babies, which can be achieved through diligent monitoring, proper diet, and supplements, like Macafem. Thanks to the advances in medicine, SCD females enjoy an improved life expectancy and can fulfill their maternal needs as well as other women.

More on Sickle Cell Disease and Getting Pregnant